I saw Jason Reitman’s Men, Women and Children at the theater last week. Other reviewers have said this before me, but just to state it again, one more time: Considering the ambitions this film clearly had, it turned out to be not particularly good. Parts of it also made me angry. I have to admit that I have not read Chad Kultgen’s novel (which this movie is based on) very carefully, but from what I can tell, some of the things that bothered me about the movie seem to be just as annoying in the book, whereas others might be a result of the adaptation for the big screen. 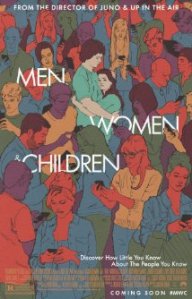 I still think the most interesting part about this movie is the exploration of aesthetic possibilities in the play with different screens and interfaces. MWC is not the first audiovisual text to experiment with this: The 2013 movie Fruitvale Station and the BBC show Sherlock have played with the visual representation of text messages, Her (2013) is another movie that toys with the incorporation of small-screen devices into a cinematic aesthetic of the digital age. Scholars are also becoming interested in this phenomenon: Not too long ago, for instance, I attended a lunch seminar with Professor Bishnupriya Ghosh (University of California) on the aesthetic of surveillance (in the manifestation of security camera feeds) in Bollywood horror movies. All in all, I don’t think the last word has been spoken in that regard, and so I am still curious about the ways in which filmmakers are trying to work through the possibilities that the interplay with different screen formats has to offer.

However, the rest of the movie left a sour taste behind. Strangely, it felt a bit like looking at the browser history of someone who is not very familiar with the internet, is deeply concerned about its dangers, but also intensely fascinated by its dark corners, which in turn makes them feel ashamed of themselves. In other words, the movie felt dirty in places it didn’t need to be, alarmist over things I felt it misrepresented, while at the same time glossing over/downplaying many serious issues that could have used a bit more in-depth scrutiny.

Two storylines in particular I would like to discuss in more detail:

BEWARE THE SPOILERS AND DISCUSSION OF SEXUAL PRACTICES.

One storyline that rankled me dealt with an anorexic girl who ends up in the hospital with an ectopic pregnancy after having lost her virginity in a less than romantic way. Of course, I assume it is possible for a girl to have intercourse for the first time, immediately get pregnant, and for this pregnancy to turn out to be an ectopic pregnancy. But the chance is very, very small. Only 1-2% of pregnancies are ectopic, and most of them occur in women who have been pregnant before or have suffered from an infection of the fallopian tubes – that is, usually women who have been sexually active for some time. Add to this the fact that the girl in question is extremely malnourished due to her eating disorder (she might not even have a cycle), and the chance of this particular event occurring becomes almost astronomically small. I’m listing these facts not to argue that it couldn’t happen – but to give more weight to the more important question: Why would it have to? Reitman portrays a very young girl who is caught in a downward spiral of anorexia, and who loses her virginity to an older boy who pressures her into sex and treats her with casually cruel indifference. This story in itself is sadly realistic, extremely serious (anorexia has an alarmingly high fatality rate) and it’s enough drama to sustain a movie all by itself. And yet the movie rounds up this story with an extremely unlikely medical emergency – for mere shock value, it seems –, as if the eating disorder, and the borderline sexual abuse, are not in themselves interesting enough to keep the audience hooked. And that right there is a serious problem. I get that this plotline is taken from the original novel, and maybe it’s too much to ask for a male creator to look up some statistics about female reproduction (*sigh*). But from the guy who made Juno – a movie that treated teenage pregnancy with humor and respect –  I somehow expected more.

I could go on about equally problematic elements of the movie: for instance the representation of the paranoid mother (Jennifer Garner) who runs digital surveillance on her daughter to “keep her safe,” and is portrayed as such a paranoid and hysterical character that we cannot take her seriously. Thus, her storyline turns into the case study of an individual pathology, distracting from the problem that the American public makes it seem completely socially acceptable for parents to control every part of their children’s private lives – from the proliferation of “10 rules for dating my daughter” T-shirts to the cultural trope of the “shovel talk.”

But I’ve made my point. To sum up: I cannot help but thinking that for a movie dealing so prominently with the internet, teenagers, and sex, Men, Women & Children seems weirdly out of touch with all of these.

This entry was posted in Uncategorized and tagged cinema, menwomen&children, online_culture, us pop culture. Bookmark the permalink.